LA Center Journey – What would we have done without this start? An exhilarating story! 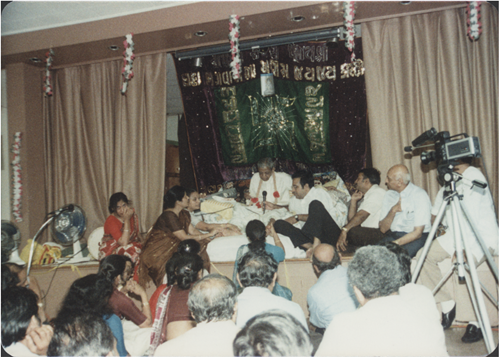 Metro Los Angeles in Southern California is a very wide spread area and is home to many small suburb cities. Los Angeles center has a very deep history with Dada’s Akram Vignan Movement, since Pujya Dada’s first visit to USA in the year 1982.

Los Angeles (LA) center is extremely graced to have hosted Pujya Dada, Pujya Niruma, Pujyashree over the last 36 years, along with other Akram dignitaries and Aptaputras.  Los Angeles center is also very fortunate to have hosted Guru Purnima with all three of our beloved Akram spiritual masters.

This center was the first established as center of Akram Vignan Movement in USA in the year 1982.  First Gnanvidhi in Los Angeles was conducted on May 8, 1982.

First Gnanvidhi in Los Angeles was conducted on Saturday May 8, 1982 at mahatma Arunhbhai’s house in Anaheim.  About 25 people took gnan that day from Puja Dada. LA center’s dedicated and regular satsang mahatmas Shashikantbhai Patel, Dakshaben Patel and Ramilaben Patel are amongst the very few fortunate ones to have attended this first Gnan Vidhi in LA. Another gnan vidhi was conducted in couple days on Monday May 10, 1982 at mahatma Shashikant Patel’s house, when remaining 20-25 mahatmas who could not make it to the first one, took gnan.  Mahatma Dr. Shirishbhai Patel is one of them.

The above 7-8 Mahatmas were meeting regularly as part of the Chinmaya Mission Study group and after spending couple of weeks with Pujya Dada and getting gnan from him, they were very happy and pleased with his presence and decided to call him back to stay for another two weeks in LA.  So after his first visit to USA in year 1982, Dada came back again to Los Angeles for another two weeks and stayed in Anaheim. This is when VHS video camera equipment was rented and Dada’s videos were recorded for the first time.

After Pujya Dada left for India, the Mahatmas continued to meet as part of the Chinmaya Mission Study group but instead started reading Dada’s books during their meetings.   By the end of year 1982, they started to meet every week as a Dada satsang group and this is how Los Angeles became the first Dada satsang center in USA.    Since its inception at the end of year 1982, the group would meet every Tuesday.  Mahatma Shirishbhai Patel was the first center coordinator of the Los Angeles group.  About 5-8 mahatmas would come regularly to the Tuesday satsang. They would read Dada’s books initially for many years and then slowly added Vidhi and Aarti over the years as a part of the satsang format.

Pujya Dada skipped visiting USA in 1983 due to the demise of his nephew Chandrakantbhai.   Subsequently he visited USA and Los Angeles from year 1984-1987. The first ever GP in USA was celebrated in presence of Pujya Dada in 1984 in New Jersey.

During Dada’s last couple years of life, two GPs were celebrated in the same year.  In the year 1986, first GP was celebrated in Walnut Creek San Francisco on the actual Guru Purnima day followed by a second GP celebration at mahatma Maganbhai Patel Hacienda Motel in Anaheim.

Pujya Dada’s last visit in USA was in 1987.  He came to Oakridge Tennessee first at mahatma Vasantbhai Patel’s house and stayed there for about six weeks.  Pujya Dada’s health conditions were not good during his last visit to USA. The first GP was celebrated approximately a month prior to the GP day in Oakridge, Tennessee.  Note, the plan was to celebrate the GP during that year in Montreal Canada but since Pujya Dada got sick, the Canada program got cancelled and instead Mahatmas were informed to come to Tennessee to celebrate the GP and that too a month prior to the actual GP day.   Few mahatmas from LA went to attend the first 1987 GP in Oakridge and requested pujya Dada to come to LA and stay in LA as Southern California weather is very favorable and can help with his health condition. Pujya Dada agreed to Mahatmas request and stayed in LA from mid-July, 1987 to mid-October.  He went back to India few days before Diwali.

A second GP was celebrated in Los Angeles on the GP day at Flamingo Motel of mahatma Prabhudas Patel in Anaheim in the year 1987.

During this long three month stay of Pujya Dada in Los Angeles, LA Mahatmas got special opportunities.    He allowed early morning Darshan for mahatmas from 6:00 AM to 8:00 AM. Around lunch time, LA Mahatmas got a chance to massage his body prior to bath and then in the evening they would take him to the beach.  LA Mahatmas took Pujya Dada to different Southern California beaches, Huntington, Newport Beach etc in the evening. LA Mahatmas would come with some prepared food and then everyone would sit at the beach and eat.

Because Pujya Dada’s health was deteriorating, he called pujya Deepakbhai to LA during his long stay.   Pujya Deepakbhai came to LA on August 18, 1987 with another Aptaputra Yogeshbhai. The first satsang after Pujya Deepakbhai arrived to LA was held in Corona at mahatma Shirishbhai Patel’s residence. This is the period when satsangs with high gnan level insights came through. One such example is Hoon Baavo Mangaldas.

In mid-September during his long stay in LA, Pujya Dada performed a special Vidhi and gave his siddhi (special blessings) to both Pujyashree and Niruma.  After this vidhi he asked Niruma to conduct satsang with adults over age of 25 and asked pujya Deepakbhai to do satsangs with individuals below 25 years in age.  During this time he gave siddhi to Niruma to conduct gnan vidhi.

Pujya Dada left his physical body on January 2, 1988.  After Dada’s demise Pujya Deepakbhai visited USA in 1988.  Mahatma Jasubhai Shah visited 1989 and Shri G A Shah (Sanghpati of JSS sangh) visited in 1991.  Dr. Shirishbhai wrote a letter to pujya Niruma and invited her to visit USA. Niruma started coming to USA again around year 1996.  Niruma’s first GP was in the year 1997 in Torrance, CA and the last one was in the year 2005 in San Jose. Aptavani 10 was introduced to mahatmas in the first GP with Niruma. Initial years both Pujyashree and Niruma came for GP and then split and took turns around 1999.  GP with Niruma in Los Angeles was celebrated in Shilo Inn, Pamona in 2003. GP with Pujyashree was celebrated with Pujyashree in 2009 at the Ontario Convention Center in a grand manner.

With Dada’s blessing we have Sadhak Chirag Shah and Aptakumari Sheetal Patel from Los Angeles.  They are both born and brought up in Southern California. Very impressed with Dada’s philosophy and gnan, they gave up their careers as an engineer and a doctor respectively and have permanently moved to Adalaj to be with Sankul bhaio and behnos. Chiragbhai was very instrumental in starting Dada satsang on the ipods.

We are blessed to have Pujashree and Aptaputras continue to visit us year after year.  While many Mahatmas have taken gnan over the years, currently there are about 150 Mahatmas that are dedicated and form the LA core group and meet for satsang on a weekly and monthly basis.  There is a sub center opened by Pujya Deepakbhai’s blessings in the Simi Valley area where about 10 -15 Mahatmas meet every week and about 35-40 meet for the monthly satsang.

Over years we have been celebrating yearly Mahatma retreats/shibir with other west coast centers in Northern California and Phoenix.

LA Center Mahatma’s demographic base is mostly adults in their mid-sixties and seventies.  With Dada’s grace, we are currently are actively working to form the YMHT group within the center with help of the national YMHT team.